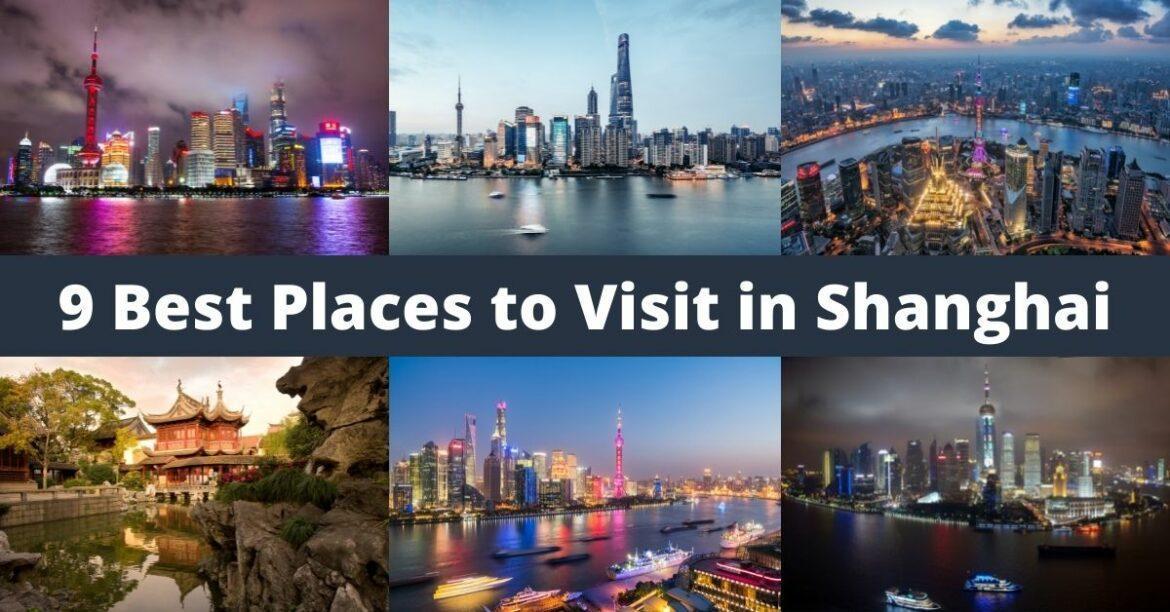 Shanghai is China’s significant metropolis that provides visitors with various thrilling sightseeing experiences. Despite its population of over 24 million people, this always-bustling city has a lot of quieter old areas and locations to visit in addition to its numerous newer tourist attractions. So, people often look for unique places to visit in Shanghai.

Because of is located near the mouth of the Yangtze River, the city is one of the busiest container ports globally. It also offers water exploration opportunities throughout the Chinese coast and inland waterways.

Top Places to Visit in Shanghai

Check out the list of some top places to visit in Shanghai. This will help you plan your vacation in China’s most fascinating metropolis, Shanghai.

The Bund waterfront region is famous among Shanghai residents, and it is one of the first sites when you are visiting Shanghai. The historical European buildings from Shanghai’s colonial days are on the west bank of the promenade. At the same time, the skyscrapers that characterize the city on postcards and stamps around the world are on the east bank.

If you visit around sunrise, you will enjoy the best Bund experience because this is the time when retirees are practicing tai chi and flying kites in front of the skyline. If you travel to Shanghai and do not visit it, your tour is incomplete.

The existing forms of this temple and pagoda date back to the tenth century. Despite being so old, it is still a functioning temple where Buddhist ceremonies occur, so be courteous when you visit. The Temple is divided into five huge halls, each devoted to a different central religious figure and decorated differently.

Remember that this is an active temple, so be respectful and courteous while exploring it. Make time to see the Maitreya Hall, which houses a massive Buddha statue, and the Grand Hall of the Great Sage, which houses incredible statues and a 16th-century bell.

Yuyuan is located near the Bund. Whenever you travel to Shanghai, it’s the most treasured and only remaining Ming Dynasty Garden. Its stunning scenery, which includes ornate bridges, bright pagodas, and small enclaves separated by dragon walls (dividers with dragon designs on top), has made it a city highlight.

It is usually overcrowded. If you hire a tour guide to describe some of the garden’s history, your experience will be enhanced.

The magnificent Hall of the Monarchs of Heaven (Tian Wang Dian) is the most remarkable structure, with statues of the four heavenly kings and two Shakyamuni sculptures. One of these beautiful statues, carved from white jade, is about two meters tall in the Wentang Main Hall, which also houses a set of Buddhist writings.

The museum opened in the basement of an apartment building in 2002 and moved to a larger area in 2019.

This boulevard has been one of the mandatory places to visit in Shanghai since the late nineteenth century. Boutiques, small shops, restaurants, shopping malls, cinemas, and street vendors line the streets. So, whatever you are looking for in Shanghai, you will almost certainly find it in this neighborhood!

Prepare your credit card or cash to make some purchases here. Or have a fun day of window shopping and people watching. Also, keep a lookout for street acts, which add a lot of life to an already crowded area.

The Shanghai Tower is China’s highest and second-tallest structure in the world. It is becoming increasingly popular as a spot to enjoy a bird’s-eye view over the vast city of Shanghai. Moreover, it features the world’s fastest elevator, which will take you to floor 119.

It also holds the record for having the world’s highest observation deck within a building or structure, at 562 meters.

Shanghai is encircled by eight ancient water towns, making it one of the top tourist attractions in the city, particularly if you are seeking an unparalleled road trip. If you are short on time to see them all, Qibao is a mandatory place to visit in Shanghai. It dates from the 10th century and is noted for its tasty street food and picturesque canal views.

This small area within the city limits, which is only a few streets long, is best appreciated during the week, as it can be a bustling tourist destination on weekends. Despite the historic old town, the Qibao Winery and cheap shopping highlight.

The Shanghai Museum was first opened in 1952. It is China’s most prominent museum of traditional Chinese art. The museum’s four floors have magnificent exhibitions of bronzes and ceramics from prehistoric cultures to the nineteenth century.

Ink drawings, seals, calligraphy, and substantial collections of ethnic minority art, are among the collection’s other attractions. It also has a well-stocked gift store and vast arrays of coinage, jade, and furnishings from the Ming and Qing dynasties (1368-1912).

The Vacation in Shanghai has to be all about exploring all of Shanghai’s incredible sights without having to worry about getting lost in the city. Book an air-conditioned minivan for a full-day guided tour that includes a stroll down the Bund and an expedition to the Jade Buddha Temple. The tour also includes stops at the Yuyuan Garden and the Shanghai Museum.

Russian Impact on Tourism from the Past 5...

2 months ago by datravelvibes Port Angeles is a beautiful city in Washingto, located at the north end of the Olympic Peninsula. It's famous for…

7 days ago by datravelvibes Martinsville comes under some of the best tourist destinations. However, you can make your vacation joyful by considering all the…

3 weeks ago by datravelvibes Saginaw is a full of wonders. Every hook and nook has an exciting tale on all sides of the city,…

1 month ago by datravelvibes Are you planning a trip to Gainesville, Texas? Don't worry if you are confused about hotels in Gainesville since here…