15 Best Things to Do in Hayden (Idaho) 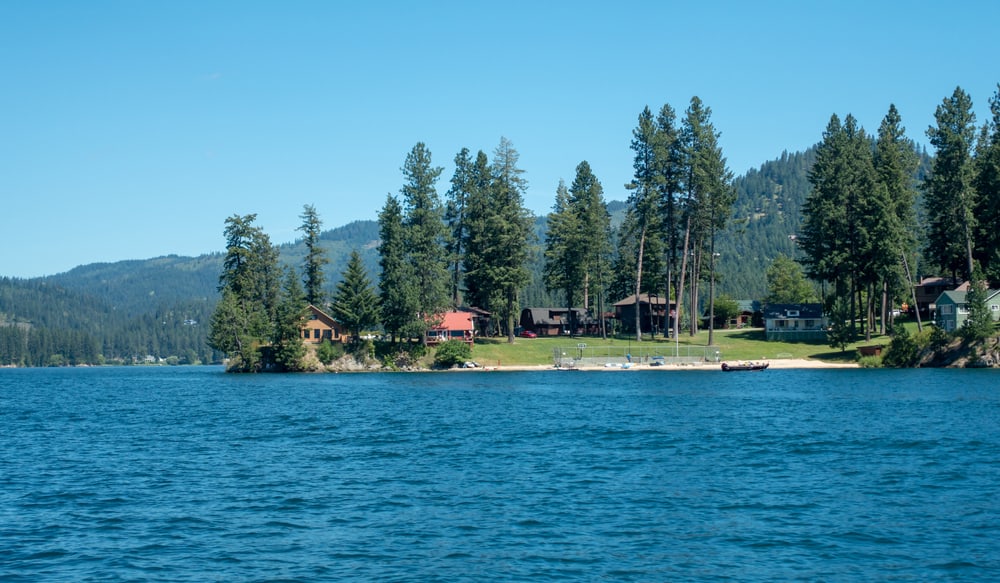 Directly North of the Coeur d’Alene, Hayden is a relatively young city. It has incredible natural scenery at surroundings and a wealth of family attractions.

Hayden has a border of large prairie expanses. In almost every direction, the peaks of the Coeur d’Alene and Spokane Mountains are on the horizon.

The two largest lakes in Idaho are also minutes away, while Hayden has a lovely beachfront park at its lake on the east side of the city.

Being so close to a regional tourism destination like Coeur d’Alene means you won’t have to travel more than a few minutes for theme parks, water parks, and unforgettable recreation experiences.

And closer to home, Hayden has a choice of all-weather attractions like a waterpark, indoor family fun centers, and also a petting zoo.

Just around the corner from Hayden City Hall and attached to the Holiday In Express and Suites is a family activity center bursting with things to do.

When summer comes around, there’s a ton of fun outside, too, with go-karts and bumper boats. Also part of the complex is Raptor Reef Indoor Water Park, which we’ll discuss next.

Attached to Triple Play is a 25,000 square-foot water park that stays open even as the mercury drops outside.

At Raptor Reef Water Park, there’s a constant temperature of 86 °F and plenty to keep everyone from toddlers and teenagers entertained.

For bigger kids, the focus of attention will be the new waterslide, Also, the Constrictor dropping 350 feet at high speed through three tight curves.

This is the fastest of Raptor Reef’s four slides, and the park also has a wave pool with three-foot waves, indoor/outdoor hot tubs, and a two-storey play area for younger kids with a tipping bucket and water jets.

A fascinating figure tied to North Idaho is the inventor and aviator Forrest Bird (1921-2015) who lived not far away in Sagle.

A technical training officer in WWII, Bird, embarked on a career inventing respirators and ventilators for the medical industry after finding a German oxygen regulator in the war and working out how to make it more functional.

The Bird Aviation Museum and Invention Center is in a hangar at Coeur d’Alene Airport and has a rotating fleet of aircraft from before WWI to the present day.

These aircraft are accompanied by exhibits about Bird’s medical inventions and famous innovations in general, like Ruth Handler’s Barbie and the Mac II, mainly by Steve Wozniak.

The plot of land has real historical significance for Hayden as in the mid-20th century; it was donated to what was then a village for its City Hall, fire station, community center, and central park.

The latter has ample green space to go with a baseball field, basketball court, and children’s playground.

Moreover, the bandstand is an anchor for Thursday Night Concerts in the Park throughout July and August and the Hayden Days event every July.

The east side of Hayden has a border of a beautiful natural lake with a mountainous and heavily indented shoreline.

Parts of Hayden Lake are surprisingly deep, descending 800 feet, while the mountains that cradle the lake on every side except Hayden good rise as high as 6,000 feet.

You can spend a day by the water at Honeysuckle Beach (more next), which also offers one of only three boat launches on the lake.

On land, you can take a scenic drive on the narrow road that weaves around the lakeshore for 40 miles, leading you through dense pine forest and past summer homes, both modern and historic.

One of only three public access points on Hayden Hayden is a public park with the management by the City of Hayden.

Honeysuckle Beach is in a nook on the lake’s west shore and was created in the early 1990s after community fundraising efforts.

Backed by tall evergreen trees is a welcoming patch of golden sand beside a shallow swimming area. Moreover, the swimming area has a walkable wooden dock for fishing on the water.

The beach has various lifeguards from mid-June through late-August, noon to 6 pm. There’s always a concession stand open during this time, and you can take a picnic on the shaded grassy space behind.

Fully licensed by the USDA, this indoor petting zoo just to the south of Hayden offers hands-on animal experiences for children all year round.

Among the species and breeds greeting you at Big Red’s Barn are dwarf goats, miniature pigs, zebus, a miniature donkey, wallabies, guinea pigs, rabbits, an array of birds, sheep, a capybara, as well as tarantulas, tortoises, and snakes.

Kept in clean and spacious enclosures, these animals become suitable for interacting with humans. Also, you can purchase a cup of fresh veggies to feed most of them. Depending on the weather, kids will also take camel and “unicorn” rides outside.

A regional honeypot in summer, Lake Coeur d’Alene, the second-largest lake in Idaho, is no more than five miles south of Hayden.

Formed at the end of the last Ice Age, the lake has more than 100 miles of scenic shoreline fringed by steep slopes covered with giant Ponderosa pines.

This is a natural wonder to admire on boat cruises, embarking from the city of Coeur d’Alene or the north shore along the paved North Idaho Centennial Trail or Tubbs Hill.

You’ll also have endless inspiration for days out, from fishing trips to paragliding, jet ski, kayak, and paddle boarding trips along the Spokane River and visits to open farms.

With more than 70 rides, attractions, slides and shows, Silverwood Theme Park is the most prominent attraction of its kind in the Pacific Northwest.

There’s more than enough for a whole day’s entertainment, just ten miles out of Hayden. The rides here run a whole gamut of intensity levels, and at the extreme end is Aftershock, shooting you forwards through a cobra roll and inverted loop and then backwards.

This is one of six roller coasters at Silverwood, along with a world of crowd-pleasing water rides, carnival-style amusements, and exciting stunt and magic shows.

Included with admission is Boulder Beach, a high-end water park with two wave pools, a lazy river, a water play area for wee ones, and slides that ramp up in intensity to the 55mph Velocity Peak.

North of the airport is 25 acres for outdoor recreation. Crofoot Park also has a picturesque location with unbroken vistas across the flat prairie to the Bitterroot Mountains in the east and the Spokane Mountains to the west.

If you have a four-legged friend with you, there’s a fenced dog park on the east side with the affectionate nickname, Pawfoot Park.

If you’re craving more wilderness, the largest body of water in the state, you can reach Lake Pend Oreille within 20 minutes of Hayden.

At the closest to the southwestern shore is Farragut State Park, which has a story of its own to tell. This is the site of a WWII naval training station, giving basic training to close to 300,000 sailors in the space of just 30 months.

In 4,000 acres, the park has some of the best views of Lake Pend Oreille, particularly at Bernard Peak, one of several scenic overlooks connected by some 40 miles of trails.

Added to that, there’s a disc golf course, facilities for mountain biking and horseback riding, hundreds of campsites, ten camping cabins, and a visitor center exploring the history of the park and its flora and fauna.

If you’re curious about the name of this craft brewery in Hayden, the founders are three United States Army veterans of Afghanistan in the bomb squad.

Moreover, the explosive theme doesn’t stop there, as the taproom has tables fashioned from old munitions crates, and the brews themselves are references to famous weapons or historical events involving explosives.

Take the 1605 Rye (year of the Gunpowder Plot), the Fatman IPA, the Marksman India Brown, or the MK84 Porter. There are eight beers on tap at any time (six flagship beers and six seasonals), and in winter, you can pull up a chair by the cozy fireside.

In a prominent position at Clark Point on the Hayden Lake Road stands a historic property with an intriguing story. The Clark House was built in 1912 as a summer home for Francis Lewis Clark (1861-?).

Just two years later, in 1914, Clark disappeared during a trip to Santa Barbara, California, the circumstances of which have never been verified.

The Clark House is culturally significant, designed in an American Colonial style by prominent architect Kirtland Cutter (1860-1939), and has been on the National Register of Historic Places since 1978.

After Clark’s disappearance, the building was used as a boys’ home, convalescent center, resort, and restaurant, before a period of neglect up to the 1990s. After the building restoration, it has most recently served as bed and breakfast.

The ultimate way to discover the full beauty of Lake Coeur d’Alene is high on a zip line suspended in the forest canopy.

This is possible through Timberline Adventures, which has a city storefront and will take you on an open-air UTV to its massive property on the lake’s northeast shore at the aptly named Beauty Bay.

There you’ll have a choice of seven zip lines; you can ride all seven or opt for a shorter tour, constantly zooming from one treetop platform to the next.

Timberline has a cute treehouse on the property, which you can also visit to make s’mores, toasted over an open flame.

North Idaho’s most beautiful wooded scenery is around, providing tricky OB at a challenging but fun 18-hole Par 72, across 6,600 yards.

Now and then, the peaks of the Bitterroot Mountains will come into view between the corridor of towering pines.

The course is matched with a perfectly groomed putting green and a natural turf driving range, while the pro shop, run by PGA pro-Dan Porter, has all the necessary gear for beginners right up to low-handicappers.

I hope this article helped you in planning your next tour. Do also check out other fabulous blogs.

How Far is Connecticut from New York City?

How to Get Italian Citizenship – Immigration Guide

1 month ago by datravelvibes When a city is full of greenery, mountains, and tall trees, you can bet that it's worth visiting, especially in…

2 months ago by datravelvibes Canton is situated near Nimishillen Creek, in the County Seat of Ohio. It's an ideal destination for tourists because of…

8 hours ago by datravelvibes Olean is a marvelous coty in Cattaraugus County, Ney York. Being the largest city in the County, it has its…

4 weeks ago by datravelvibes When you are in Elizabeth City, North Carolina, most feelings include being amazed, astonished, and stunned by the beauty. .…

1 month ago by datravelvibes Goldsboro, NC, is always crowded in Summer because there is so much to visit, see, and experience. You can explore…