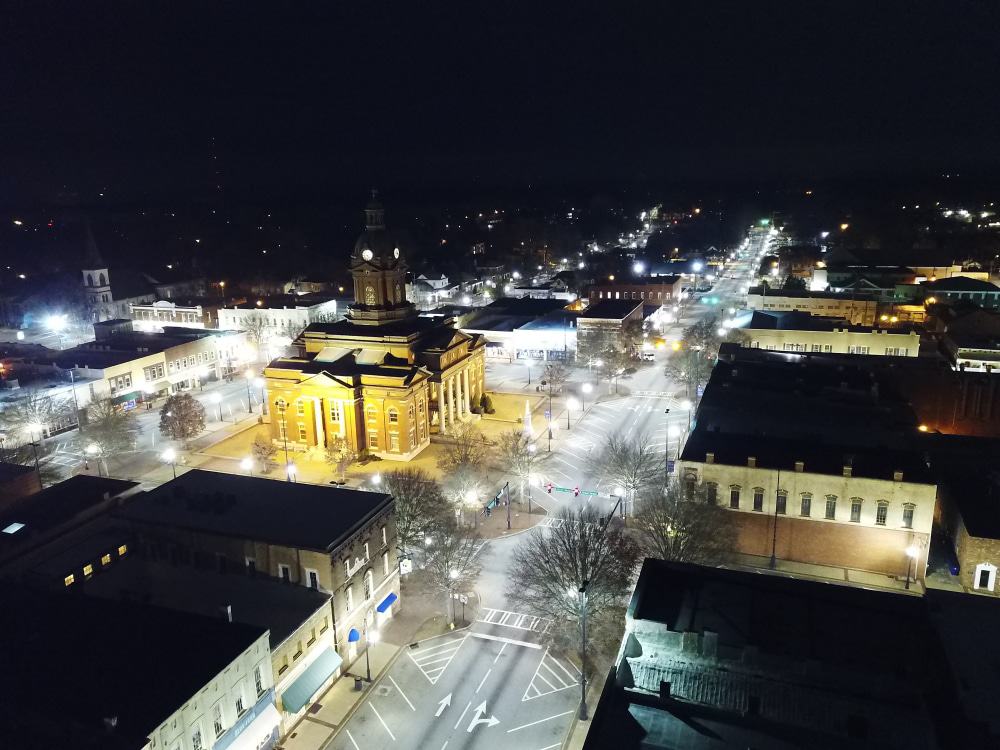 The Georgia city of Newnan is part of the wider metropolitan Atlanta region. It lies approximately 65 kilometers southwest of the state capital. Despite its proximity to the state’s largest city, Newnan has its distinct ambiance and history. It was founded in 1828, during the first wave of European-American settlement in the southeast of the United States.

Heavily reliant on slave labor to power the cotton industry that made it rich, Newnan was largely untouched by the American Civil War. It means the city can demonstrate excellent examples of antebellum (pre-war) architecture. In addition, Newnan has some exciting cultural and natural attractions, while the bright lights of Atlanta are never far away.

Here are the best things to do in Newnan, Georgia.

Newnan’s downtown district covers nine square blocks and follows the layout created with the city’s founding in 1828. Its broad avenues lead around the grand edifice of Coweta County Courthouse. It was built from red-brown brick in a Greek Revivalist style in 1904 and included a tower with a clock whose mechanism was once wound by hand.

The area also contains the first Carnegie library in the state and several historic religious buildings. What’s more, there’s a section of stores along East Broad Road that is a rare surviving example from the period when racial segregation extended to the shopping habits of Newnan.

Occupying another fine red-brick Greek Revival style building, today’s McRitchie-Hollis Museum was built in 1937. Now fully renovated to its former glory, it introduces what life was like in the American south during the Great Depression of the 1920s and 1930s and the Second World War which followed.

Its exhibition spaces contain original furniture from the Hollis family, who had previously called the building home. Visitors can also see how simple kitchen and bathroom facilities were roughly one hundred years ago. A beautiful curving staircase leads upstairs, from where visitors can take in the lawns and mature planting outside.

Although the buildings of Newnan survived the American Civil War largely untouched, this does not mean the city was unaffected by the war. The Brown’s Mill Battlefield Site is a relatively new public open space with an area of slightly more than 80 hectares. It was the site of a battle that saw a defeat of Abraham Lincoln’s Unionist cavalry by the soldiers of the confederate south.

Mainly in its original state, it contains walking and biking trails that loop around the site and its small lake. Interpretative signs provide more information for anyone interested in learning more about the battle of 1864 itself.

The Senoia Area Historical Society Museum is located in Senoia, 30 minutes east of Newnan. Its atrium and five rooms have antique pieces of furniture in dark hardwoods. Also, its cabinets imply the mementos that help visitors discover life in Senoia over the ages.

Surrounded by original plasterwork moldings, the dedicated History Room contains teller windows from the Farmers and Merchants Bank that date to 1874. More recently, there is also a display for the torch relay of the 1996 Atlanta Olympics. It means that this museum space truly spans the complete history of the region.

Newnan’s Oak Hill Cemetery contains some 12,000 graves. Created in 1833, just five years after Newnan was founded, this historic cemetery includes several marked graves. Fine stone monuments rise across the 25-hectare site, containing the graves of two of Georgia’s governors. It is also the final resting place of soldiers from the War of Independence against Britain and 270 confederate troops that died during the Civil War.

Many died of wounds or diseases away from the battlefields around Atlanta in Newnan, recognized as a hospital city in the period. With graves continuing into the Vietnam War, Oak Hill Cemetery is an important landmark for Newnan and the entire United States.

Roughly 12 kilometers north of Newnan on the road to Roscoe, Dunaway Gardens cover less than half the size of Oak Hill Cemetery. However, that doesn’t mean that this botanic garden is easy to miss off the list of the best things to do in Newnan and around.

Re-established after being abandoned for many years, these gardens tumble down a hillside in a series of five terraces. Dotted with sightlines pointing to sculptures and viewpoints, these terraces contain waterfalls, hanging gardens, and goldfish ponds. In addition, there’s a granite outcrop known as Little Stone Mountain.

Head a similar distance west rather than north, and you’ll reach Chattahoochee Bend, State Park. The park lies on the southern bank of the Chattahoochee River as it meanders in a large arc.

One of Georgia’s largest state parks has almost 20 kilometers of hiking trails and somewhere in the region of six kilometers of mountain biking trails. But even if you have no intention of being particularly active, it’s worth making the short journey here to enjoy a fine example of Georgia’s wilderness – and maybe an ice cream at the gift shop too.

While small, there are several reasons to consider spending some time in this museum. Also famous as Caswell House, its artifacts relating to African-American history are housed within a shotgun-style home typical in the American south from the civil war until the 1920s.

Next door is the Farmers Street Cemetery, which many researchers believe could be the largest cemetery for enslaved people in southern states. But Caswell House also has a reputation for haunting. People have seen the figure of Ruby, who once owned the structure and enjoyed playing with children who might come to visit.

The first brewery to call Newnan home, the Abide Brewing Company is one of the new waves of craft breweries producing some exquisite and unusual beers. So small they call it a nano-brewery, Three Newnan locals set up abide with a dream. And while you can sample the result in many of Newnan’s bars, there’s nothing quite like heading to the brewery itself.

The staff here offer regular tours of the facilities behind the scenes. In addition to having their full range of beers on tap, from lagers to European style brews.

A favorite retreat of Franklin D Roosevelt, the 32nd President of the United States, the Little White House is located roughly 50 kilometers south of Newnan in Warm Springs. Roosevelt had this retreat built on Pine Mountain long before he became President when he was the governor of New York.

Visiting regularly, it was at the Little White House that Roosevelt died on April 12th, 1945, just three months into winning a fourth term in the actual White House in Washington DC. Preserved as it was on the day Roosevelt died, the museum is filled with Roosevelt’s items, including his favorite chair and an unfinished presidential portrait.

This small city center parks a short distance from Newnan’s historic downtown district has been an important meeting point for the citizens of Newnan for decades. It features a grand entranceway featuring 25 Greek-style columns. These lead down to a fountain, terraced lawn, an excellent place for picnics, and the various paths that wind their way around the space.

The garden also contains two sculptures. The first is Flight Lesson, and the second is the Lady of the House. It sees a joyful woman holding a piece of clapboard, used to build many of Newnan homes, above her head. It represents the city’s uniqueness since no two parts of the clapboard are ever the same. Perfect for anyone who enjoys the quirky and unusual, you’ll find Barbie Beach around 16 kilometers from Newnan on the road to Senoia.

This witty roadside attraction features a beach of entirely nude barbie dolls and so charmed the producers of the hit TV show The Walking Dead that they donated some zombie dolls to the collection. Their beachside activities are changed regularly, so you’ll never quite know what you’ll come across if you visit the beach. However, scenes tend to echo current events such as major sporting competitions.

This Newnan attraction might sound like a museum, but if that’s what you’re expecting, you’re in for a huge shock. Historic Banning Mills is an adventure resort offering everything from ziplining to climbing walls. Nestled in spectacular natural scenery, the resort also provides the chance to trek through its woods and across its streams on horseback or on the water itself by kayak.

At the same time, guests can spoil themselves at the spa and relax amid the sort of hospitality the south is famous for throughout the world. Historic Banning Mills is 25 kilometers northwest of Newnan.

Roughly double the distance from Newnan as Historic Banning Mills, the Delta Flight Museum is located in the southern suburbs of Atlanta. Dedicated to the first one hundred years of Delta Airlines, it can be found in two historic hangers dating from the 1940s on the outskirts of Hartsfield-Jackson International Airport.

The museum displays and artifacts collection date even further back in time and include a 1931 six-seater plane that was the airline’s first passenger aircraft. Dwarfing it is the Spirit of Delta, a 767-200 aircraft that was its flagship plane right up until 2004.

While you’re in the Atlanta suburbs, you should also check out the Georgia Aquarium in the center of the state capital. One of the largest aquariums globally, it is one of just a handful of aquaria that can boast a whale shark tank.

In addition, popular attractions include noisy California sea lions, pure white beluga whales, and the massive bulk of its manta rays. In all, the aquarium covers each of the world’s major ocean environments in turn, from tropical shallows home to brightly-colors corals to the coldest waters on the planet.

15 Best Things to Do in Nampa (Idaho)

1 week ago by datravelvibes The city lies halfway between San Francisco and Portland in the Cascade Mountains at the base of Mount Shasta. You…

1 week ago by datravelvibes Your perspective on the world might change after seeing the Galapagos Islands. . Read the relevant article on our website…

1 month ago by datravelvibes Nature's artistry is the biggest feature tourists or other people on vacations crave. . Read the relevant article on our…

1 month ago by datravelvibes When you think of great family vacation spots, Pigeon Forge is probably one of the first places that come to…

4 weeks ago by datravelvibes Great Bend is a fantastic city and county seat of Borton County. It has mesmerizing views and calm weather that…

3 weeks ago by datravelvibes Kingsville is the southern region of the American state, Texas. It is a city full of tourist attractions and rich…